Collection of random notes from my brain. Mostly meant for my future self. But open to the world. Guaranteed unpolished. No warranties.

Here's the Apple script that will get the track information from Spotify for the current track. Once you have this, you just need a way to print the result somewhere. I use the Text Expander app on the Mac to insert text snippets with simple keyboard shortcuts.

Add the Script to Text Expander

Then you just add that to TextExpander. 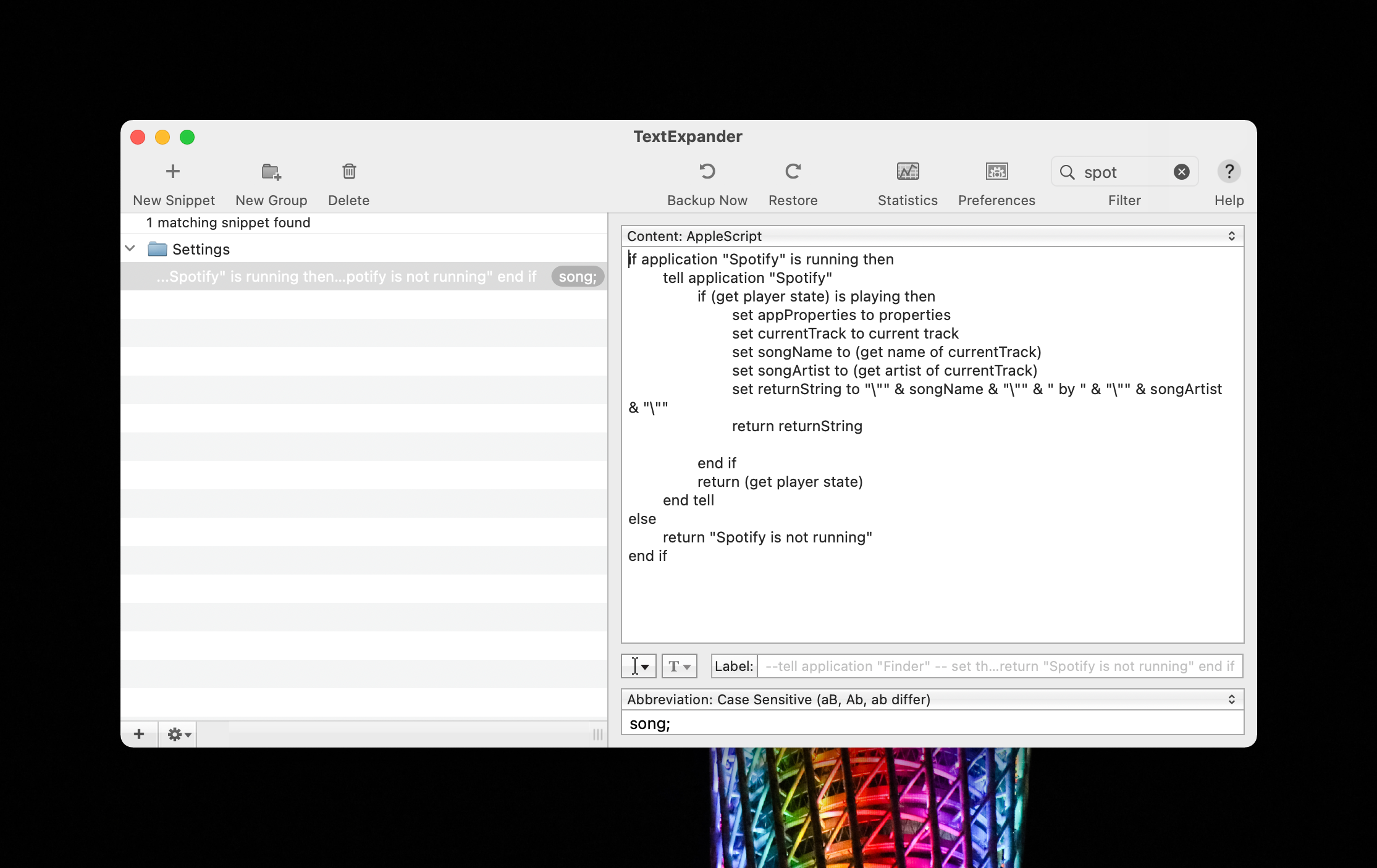 How I make my morning tea

Setapp Apps I love and recommend to everyone who'd listen

How I consume Podcasts and long form videos using Otter

The rest of the workflow is the same as Podcasts.

My ever changing thoughts on Note taking

Alright, typing this for the first time in Noteplan 3. I think I accidentally ran into Noteplan 3, when the developer mentioned the app in a forum. I think I was actually looking for a "Notion like" theme for Obsidian, and ran into this post - Notion, Roam or Obsidian?

Looks like Noteplan 3 will be included as part of Setapp eventually. NotePlan 3 beta - Software - MPU Talk

Just discovered this while browsing on the phone the differences between iCloud vs CloudKit vs Dropbox sync supported by Noteplan. Using NotePlan as an Obsidian companion - Obsidian Forum

What I like thus far about Noteplan is that all my notes are in one place. This is a Roam like interface where the notes are displayed one after another in a chronological fashion. I think this is something that's missing in Obsidian, and also even in something like Day One. I could create folders for 750 Words, and just start writing in them, and then link them back to the date, so it will have backlinks. This could actually be pretty interesting.

Time-blocking with NotePlan Let's see if Noteplan actually does #timeblocking. Let's say that I want to work on the Website tomorrow for an hour. Let me see how I will time block it, without ever leaving this app.

Woah this was pretty powerful. It created a calendar event for this task as I was typing that. Let me go back, and change the time now. Wow. Just changed it, and it updated the event on the calendar. This is pretty awesome.

Update: Looks like it creates the time blocks for the current day, even though I said tomorrow.

Nope. Even this created the event today.

Multiple tabs/columns I was wondering if NotePlan has a way to split columns like Obsidian does. Turns out, you can press CMD + Click, and it opens the link in a new window. It's not the same as the way Obsidian does with split columns - vertical and horizontal, but it's something.

2021-01-13 I think this is actually one of the deficiencies of NotePlan, and where Obsidian and even Roam really excel. I can have multiple columns open to show several notes at the same time, which makes it easier to make connections to related notes.

Update: Maybe I was wrong about the last part. Looks like the "Open in new window" is in fact available for each note through the contextual menu.

Update 2: I now remember, what's missing is a way to open a link in a new window, by right clicking on it. This is the absolute basic workflow. Obsidian allows this by command clicking it, so it opens the link in a new split tab column. Obsidian also allows you to to move these windows around, and rearrange them to your heart's content. See screenshot above.

Update 3: Wait, I am wrong about this one too, it seems. Unless this is a new feature that's been added. Looks like you can press CMD + Click to open the link in a new window. This is huge, and really excited about this.

Been using Roam for sometime now, but found a couple things really missing in Roam are -

Obsidian, in comparison seems to be have a better data model in this sense, cause it allows you to store the files in markdown format locally on your computer, which is a lot better they insisted than having no 2FA and no end-to-end encryption, which apps like Day One, Dropbox, and iCloud provide.

Based on that, started looking at [[Obsidian]] pretty seriously yesterday. I had heard of it couple months back when I was debating if there were any cheaper alternatives to Roam. I also didn't like the fact back then (which MPY also reiterated) that it was a web only app, with no Mac version available.

Another thing that they said that bothers me long term is the fact that they raised $8MM in funding, which can mean that they could lose track, and really fuck this up.

So, started looking at [[Obsidian]] last night, and got the theme, and the hotkeys, and the favorites matched up to how I had it in Roam, and am typing this into this window in [[Obsidian]]. I actually like this so far. It's not too different from Roam. There are a few differences in how they handle the actual outline of the text. The first major one here is that Roam is strictly an outline format, with bullets. It does have its own version of custom commands, like highlighting, word count, pomodoro timer etc, but overall, it's an outline format, with really good support for nesting.

[[Obsidian]], on the other hand is really all markdown, since it stores files in its native markdown format. So, you have the flexibility to create sections, and format the text using markdown format. Since it has the simplicity of markdown, it could potentially also act as your writing app.

Speaking of which it seems like there are few different kinds of note taking apps (again credit to MPU) for talking about this in their [[Mac Power Users (MPU) Podcast]] - Research episode.

The line numbers here are pretty cool. This means that I can actually use this for full writing as well, including scripts for videos, and drafts for blog posts, with the exception of including images.

I am really liking the switch to [[Obsidian]].

It's been almost 4 years now, since I quit my job at ESG. I remember I had written the email draft I was to send my manager a good 3 weeks before I gave in my notice - Jan 4 2010.

If I think about it, what I am and able to do today, I owe it wholly to that decision I made back in 2009. It was a scary decision. I had set myself on a journey to build something. We (Kunal and I) built Rootein. It didn't work out the way we would have wanted it to, but it was an amazing experience. All we really wanted to do was build and launch something. Perhaps that's where we went wrong. We had no idea what we wanted the future to be with Rootein. We were just too excited to launch it and let people play around with it.